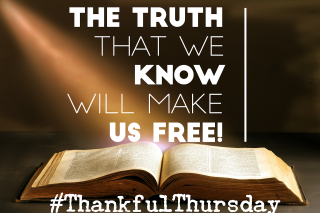 Satan was a murderer from the beginning, and does not stand in the truth, because there is no truth in him. When he speaks a lie, he speaks from his own resources, for he is a liar and the father of it.
John 8:44 NKJV
Satan is a murderer and a liar. John 10:10 calls him a theif and says his purpose is to steal, kill, and destroy. He wants to steal your faith, and kill your dreams so he can destroy your soul. The only way he can do any of this is through lies and deception. Almost every spiritual attack is against and for your faith. The Lord has be on assignment in this post to bring to light the deception of the enemy and expose every lie of hell. Satan is full of nothing but hot air and lies. The truth of God can burst him like a needle does a balloon and extinguish every lie.
Then Jesus said to those Jews who believed Him, “If you abide in My word, you are My disciples indeed.  And you shall know the truth, and the truth shall make you free.”
John 8:31‭-‬32 NKJV
I am thankful for the truth that makes us free. What truth? The truth of the Word of God. How? When we abide or remain in the Word of God. I want to emphasize it is the truth that we know that will make us free. To know the truth means you fully accept, believe, and walk in it.
So when the enemy comes with his lies and says, God doesn’t love you,  He can’t forgive you, it is over for you, or that God is mad at you.
You KNOW…You Accept…You Believe…
His Truth says, He loves you.
For God so loved the world that He gave His only begotten Son, that whoever believes in Him should not perish but have everlasting life.
John 3:16 NKJV
His truth says, He is slow to anger
towards you.
The Lord  is merciful and gracious, Slow to anger, and abounding in mercy.
Psalms 103:8 NKJV
His truth says, He is compassionate.
But when He saw the multitudes, He was moved with compassion for them, because they were weary and scattered, like sheep having no shepherd.
Matthew 9:36 NKJV
His truth says He is merciful.
not by works of righteousness which we have done, but according to His mercy He saved us, through the washing of regeneration and renewing of the Holy Spirit,
Titus 3:5 NKJV
His truth says, God is gracious towards you.
The Lord  is gracious and full of compassion, Slow to anger and great in mercy.
Psalms 145:8 NKJV
His truth says, He forgives our sin.
If we confess our sins, He is faithful and just to forgive us our sins and to cleanse us from all unrighteousness.
I John 1:9 NKJV
His truth says, He heals all sickness.
But He was  wounded for our transgressions, He  was bruised for our iniquities; The chastisement for our peace was upon Him, And by His stripes we are healed.
Isaiah 53:5 NKJV
His truth says, God binds up the brokenhearted.
He heals the brokenhearted And binds up their wounds.
Psalms 147:3 NKJV
His truth says, He redeems us from destruction.
Who redeems your life from destruction, Psalms 103:4a
His truth says, He desires to crown you with lovingkindness and tender mercies.
Who crowns you with lovingkindness and tender mercies,
Psalms 103:4b NKJV
Father, I pray over every person that reads this post that the lies of the enemy will be silenced and brought to nothing. Father I cancel every plot, scheme, and tactic of the enemy. I tear down every stronghold and mindset that limits the love, power, forgiveness and presence of God. Father give them ears to hear the truth of Your Word. Father open their ears to hear the I love you of Your word. Lord may Your truth be heard, believed, and magnified in their life. Lord I declare freedom and liberty in the Name of Jesus.
James 4:7-8
Therefore submit to God. Resist the devil and he will flee from you. Draw near to God and He will draw near to you…..